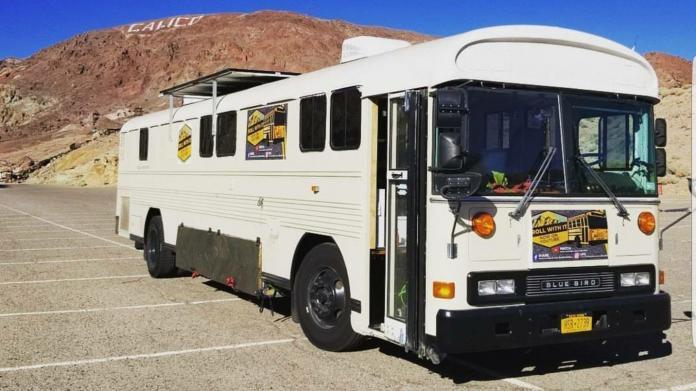 We were a week into our relationship when Scott told me that he wanted to live on a school bus (skoolie) together. We were sitting on the floor of my overpriced, outdated West Hollywood apartment when I laughed in his face and told him, “No, that is not going to actually happen”.

Three months of convincing and research passed before Scott received a $100,000 insurance check for a horrific motorcycle accident that occurred the previous year. Half of it paid off student loans, and the other half went directly towards our bus. We had the funds to make this dream a reality, what more would we need? 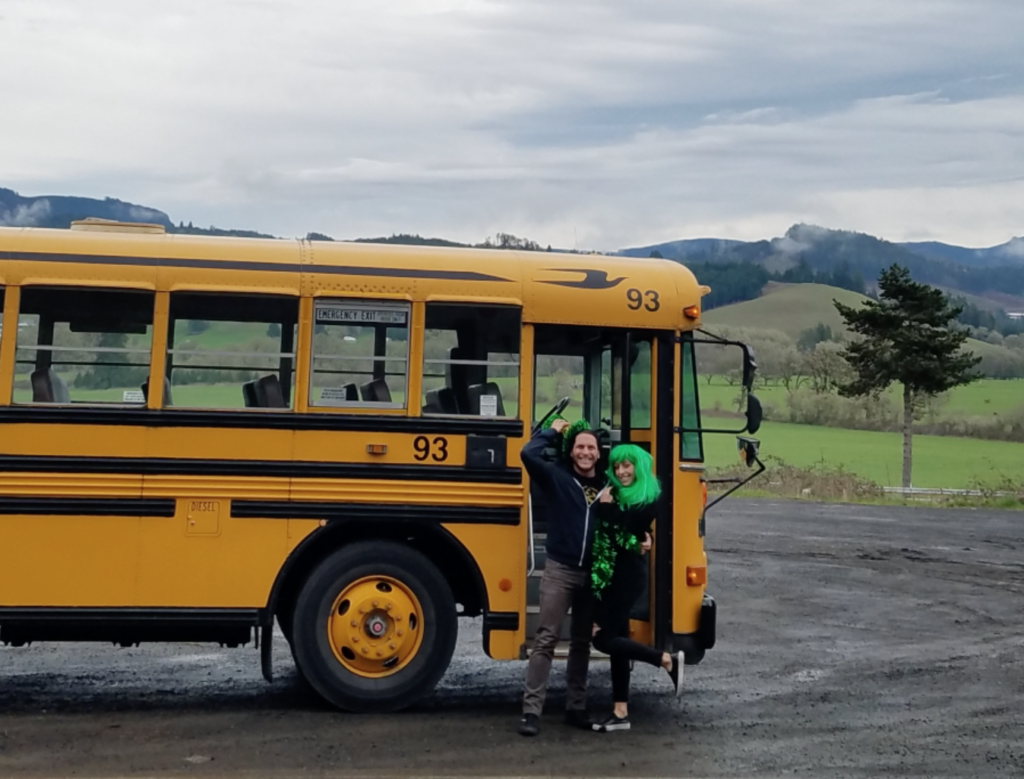 We decided to buy a full-sized, 37 foot bus as a means to travel longer, in hopes that we wouldn’t outgrow it for several years. We flew to Springfield, Oregon on St.Patrick’s day of 2017 to pick up our bus that we won in an online auction for $7,000. Driving the bus to a small farm in New York to convert it into our home for 6 months felt like going away to summer camp. As a former reality TV producer and a Malibu restaurant bartender, neither of us had any idea what we were doing. Not only were we building a house for the first time, we were building a home inside of a giant metal tube on wheels.

Unfortunately, we couldn’t find a comprehensive “Skoolie Conversions for Dummies” book available anywhere. While there are forums and conversion groups on Facebook, information on how to convert a bus was limited and scarce. When we started our conversion, we set out to film the first all-inclusive “How to Convert a School Bus” series on YouTube. With experience as a YouTube executive and a reality T.V. producer, Scott was excited to create his own content for the first time. We didn’t know how to convert a bus, but we did know how to produce a show.

We started with ripping out all 26 benches. As far as demolition goes, many school bus converters stop here and build on top of existing walls and floors. We opted to rip out the ceiling, walls, and floors to ensure the bus would be properly re-insulated and mold free. We started with the ceiling, using only a crowbar and a hammer to smash the thousands of RIVETS that held it together. I held the crowbar tightly in place, while Scott banged the bar with a hammer. It felt like hitting a fast ball with a wooden bat, a thousand times in a row. Our youtube channel quickly turned from informative videos to comedic how-not-to’s. We used air chisels, grinders, hammers, crowbars, drill bits, center punches, and brut strength to smash every individual rivet till we got through to the base shell.

Once the walls were removed, we decided to tear out the silicone seamed windows that we later replaced with sheet metal and new RV windows. We finished demolition with ripping out the eroding rubber floor, where we found remnants lollipop wrappers, pencil top erasers, and parachute soldier figurines. Demolition was dirty, tedious, and the most physically draining part of the construction. 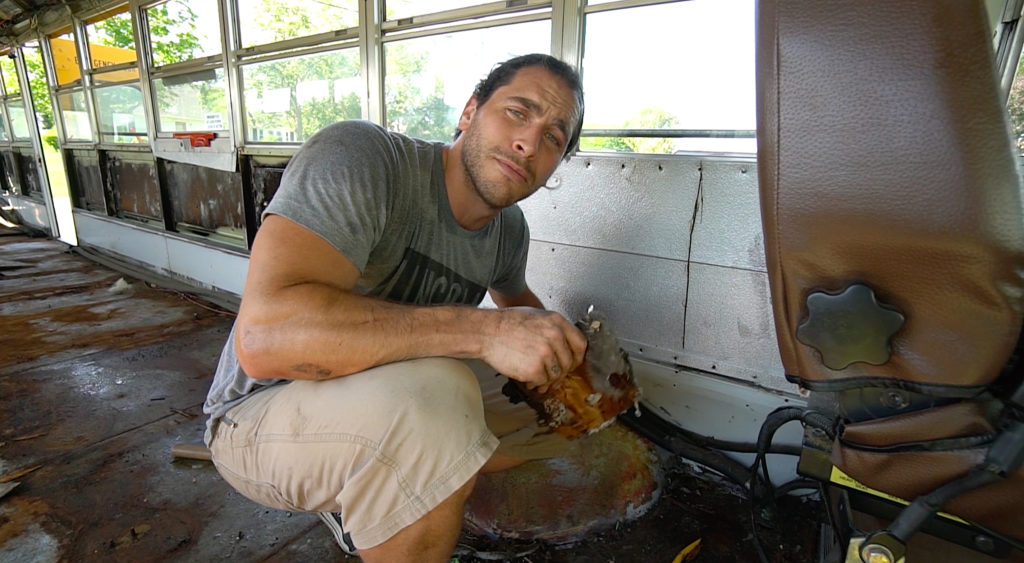 Stage 2: Floor Plan and the Issues Begin to Arise

We were sure the hard part was over, and we were finally on to the fun stuff, like taping out our floor plan. This was the part Scott looked forward to the most, drawing up ideas in graph notebooks for months. After etching out his vision with duct tape on our fresh plywood subfloor, we noticed the grey clouds in the sky, with rain approaching our windowless bus. We sped to home depot and returned with two mega spools of packaging saran wrap. I stood on the roof of our jeep letting the plastic unwind from my fingertips while Scott drove in circles around the bus. It (kind of) worked. The New York summer rain storms were relentless, and quickly became our biggest setback as we tried to move forward with construction. 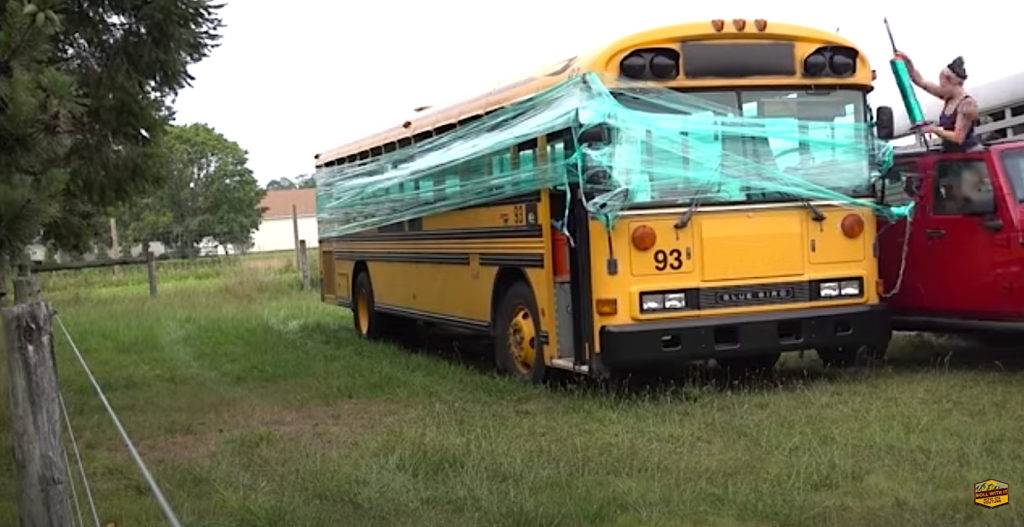 Stage 3: Installation and the Struggles Continue

Months went by as we worked daily to install windows, floors, cabinets, countertops, walls, the furnace, air conditioners, the ceiling, a composting toilet, and the shower walls. We did every project twice, and construction took exactly twice as long as we thought it would. We caught every mistake we made on camera. We were construction workers by day, and video editors by night. We moved from the apartment we were renting to Scott’s mother’s house to save money. Winter was right around the corner, and we only had two more obstacles before completing construction. The more we researched, the more we realized that setting up plumbing and electric were two skills that could not be learned by winter. We made it this far, and finally felt defeated and out of tools in our shed.

Scott was on the verge of tears, sitting on the floor when we (literally) got a knock on his mother’s front door. Salvatore Pedagno, Scott’s childhood best friend, had been following along on youtube greeted us with, “I don’t know if you know this, but you need help”.

Setting up solar on a school bus was a crapshoot. With so many components and every system being different, we were lost. We reached out to several skoolie conversion groups on Facebook for suggestions and guidance. The Skoolie community is extremely kind, helpful, and inviting. A fellow bus builder, Wes Lewis, told us what we needed to buy, and with Sal’s help we were able to configure a system that works, but we will probably never understand.

The temperature started to plummet. We worked from 6AM till midnight, seven days a week. It was dark out and 28° by 4 PM, with snow arriving any day now. We were living at Scott’s mother’s house for three months now, and down to $6,000 that we saved to start our travels with. Scott reluctantly agreed to hire a plumber to install our gas and water lines. After six long months of construction, we needed a piece of mind. It ended up costing us $4,000.

With help from our friends, we managed to finish construction soon after plumbing was installed, and we got off the island a few days before a snowstorm hit.

Overall our conversion cost us an estimated $50,000, including the price of the bus. With the knowledge we gained along the way, we believe we could do it again for $35,000. We both dedicated our full time to this project, which took exactly six months to complete.

Construction was the only thing on our minds for six months straight, and as soon as it ended, it was dead. We didn’t talk about it or think about it for weeks. We raced off Long Island as quickly as we could and headed to Florida like everyone else does in New York when they retire. We’ve been traveling in the bus for four months now, and we wouldn’t change a thing about the build.

We both agreed that converting the bus into our home was the hardest thing that either of us had ever done. I’m certainly glad we did it, but I wouldn’t do it again! While construction finally ended, our conversion series lives on to entertain and inform hopeful skoolie builders. Find it here, at Roll With It

The post Tips and Challenges of Converting a School Bus (Skoolie) appeared first on Outbound Living.

The Nomadic Movement: They Said We Would NEVER Make It //...

EXPLORIST life: How to Install Solar on a DIY Campervan |...

Living The Van Life: Australia – Down Under In a Van