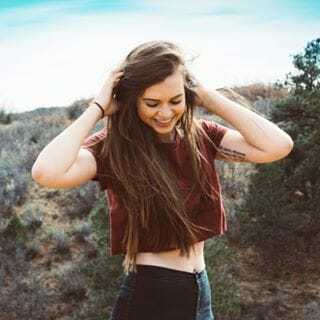 Divine On The Road
This week we chatted with Sydney. Sydney is a certified yoga instructor. She lives in a 2011 Mercedes Sprinter and has been on the road since October 2017. Follow along on her blog and social channels to get more vanlife advice, tips and videos! 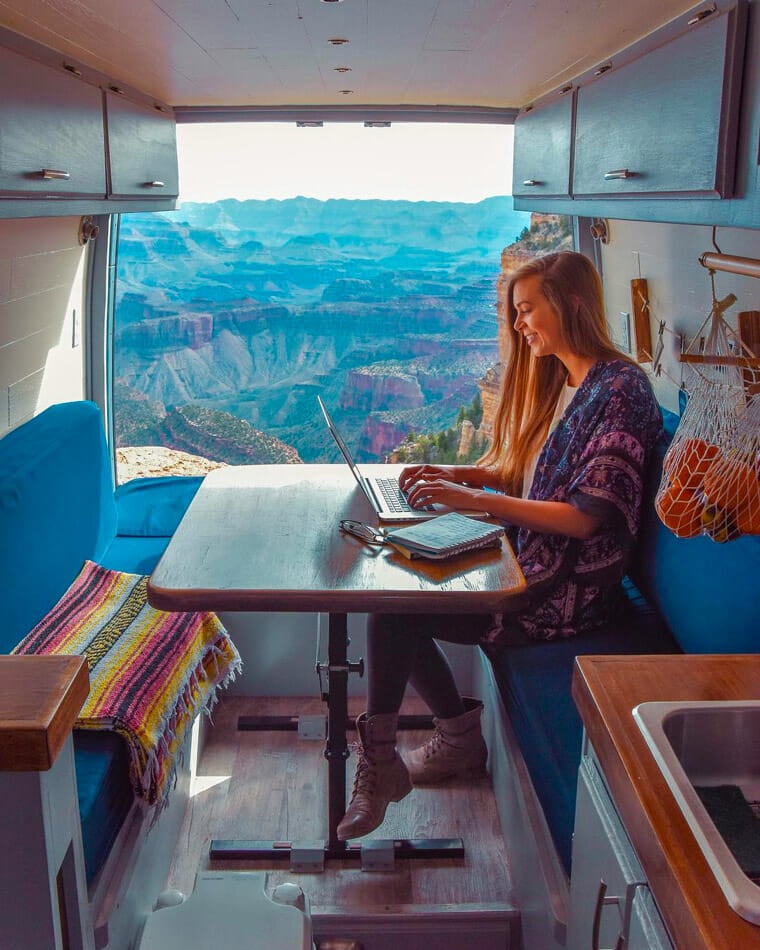 Interview With Divine On The Road

If you could change one thing about your van build what would it be?

I would change our table base to the telescope base. We have two table legs that “collapse” which don’t take up much space, but the telescope one looks really slim and seems like it would take up even less! We’re thinking about changing it some time in the future

What is the first thing or two that you forgot to pack and had to buy right away once moving into a van?

The only thing we didn’t have when we first left was a tent! We love camping inside and outside the van so we had to buy one right away. Other than that, we planned for months ahead of time so it was pretty impossible to forget much!

What is the hardest or most frustrating thing about living on the road?

The hardest thing for me is not seeing my family often. I had never really gone months at a time without seeing them and my first nephew was born a week after the van was finished. So not being a bigger part in his life so far has been awful. But I’m thankful for FaceTime! The nice part of this is that we have the ability to go home any time we really need. Whenever we get a little too homesick, we start planning our way back home for a visit.

What is something you expected to be difficult that turned out to be a non-issue?

I was sure that we would have some issues with the electrical or solar. We did things really different by having an induction stove and regular mini fridge so I had no idea it would all work so perfectly! 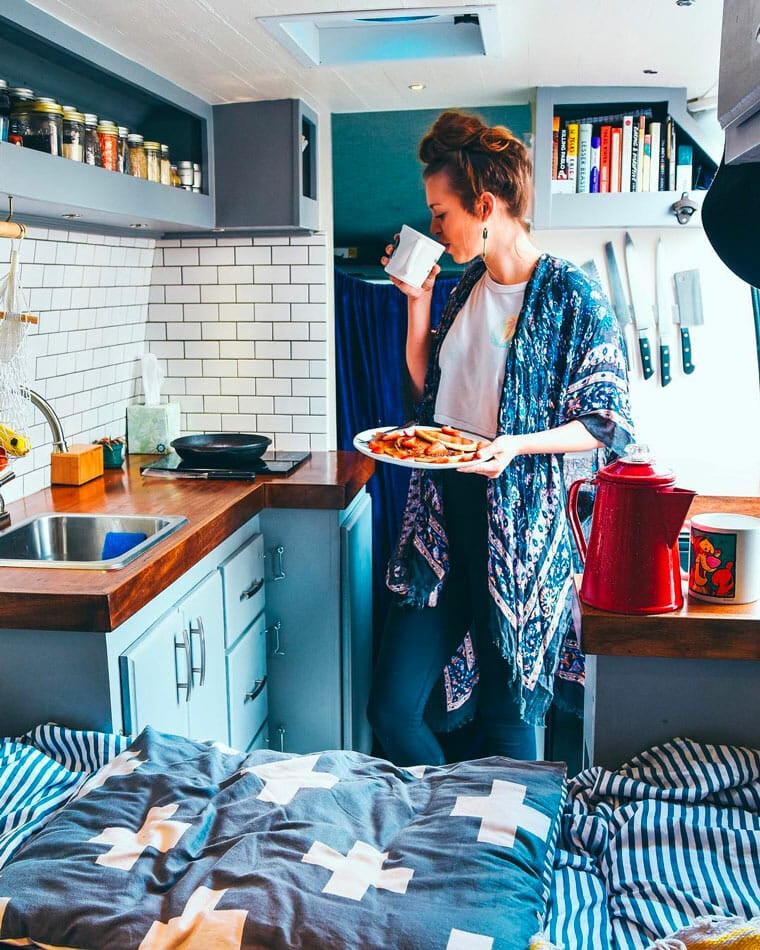 I saw you were running a refrigerator, induction stove and a few smaller electrical items. Is 400 Watts of solar enough for you? Have you ever run out of power?

I guess that leads me into this question nicely because it has been plenty actually! We do have two 95 amp hour batteries along with a large inverter (1500 watt continuous; 3000 watt surge). It’s been more than enough and we only ran out of power once! Parked under a tree for a few days and cooking a lot, we ran out and turned the car on. It was back up and running right away because we hooked the batteries to the alternator!

From your blog, it sounds like you initially were planning to vanlife for about 8 months. Is that still the plan? What makes you want to go longer?

Yeah you think you have everything planned until you get on the road! I had no idea how van life would be for us and thinking about it back then, 8 months seemed like plenty. Now that we’ve been on the road, I can’t imagine not living this way. It’s no longer a road trip for us but a way of living. Thinking of my old apartment in Chicago just gives me anxiety at this point!

What would you do differently moving back into a house now than before the trip?

I really can’t imagine moving back into a house for at least a few years. But I think I would just live so much more minimally. After having only the things that we can fit inside the van, a house full of furniture and extra stuff just sounds stressful! I could see myself focusing much more on the landscape and location of the house now instead of thinking about what to put inside. 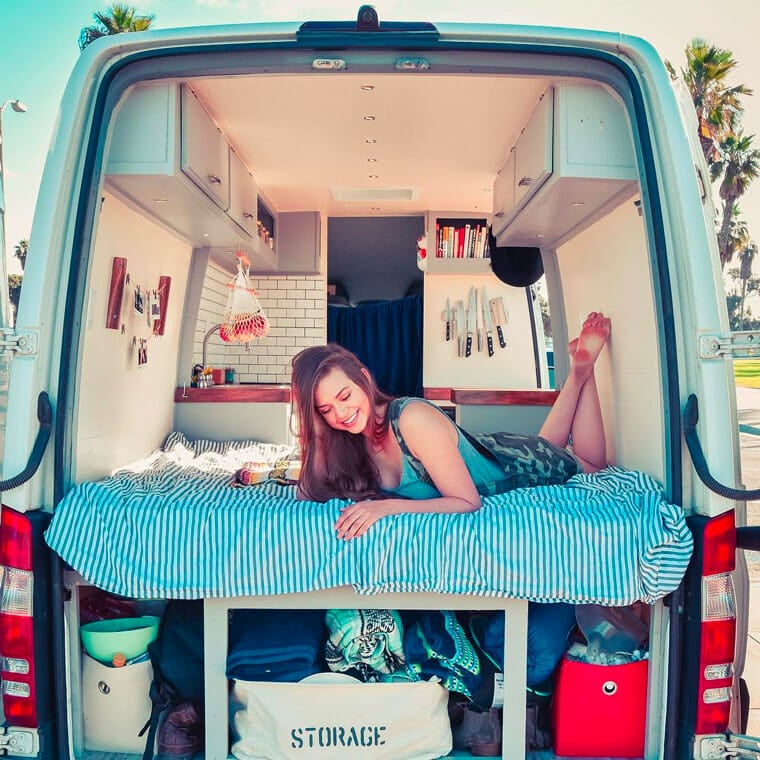 What is one place you want to take your van that is still on the bucket list?

Banff, Alberta! We’ve wanted to go there for so long. Canada in general is really high on the bucket list, but Banff just looks especially beautiful!

What is your favorite recipe or snack on the road?

What is one piece of advice you would give someone thinking about living in a van?

I tell anyone and everyone to make the jump and go for it. I have truly never a met a person that hit the road and said they regretted it. Living in a van sounds so ridiculous until you do it and realize how incredible it can be. I don’t want to sell it as a perfect lifestyle because it’s definitely really hard at times. But as long as you prepare for it financially and mentally, you can make it a smooth transition and really enjoy all of the opportunities it can bring.

What van are you currently living in?

How did you find your van?

I searched high and low for a Sprinter with low miles that we could actually afford! It ended up being cheaper to ship the van we have from Virginia to Indianapolis rather than buy one that was already in the area. It was a random van listed on one of those car selling websites. I checked them all everyday for weeks until I found the right one!

Approximately how much did it cost to purchase?

Approximately how much did you spend building it out?

We spent about $5,000 on materials! We did have family friends help out with the build but they prefer their prices to be private. We basically bought the materials and handed them off to the guys! Read the post on DivineOnTheRoad.com for a full cost breakdown

The post Van Life Blog: Interview With Divine On The Road appeared first on Parked In Paradise.

baking without an oven

Gifts for a campervan owner: The ultimate Vanlife gift guide

Digtal Detox – Top Tips for Cutting out Technology on the Road

Susi Cruz: How Good Do We Know Each Other Really After 1 Year Relationship

Living The Van Life: Winter Storm In a Van – Living...

Vanlife as a Dog: The Eternal Car Ride

Fasting on the Road for Ramadan!